Home / News / types of juicers and how they work

types of juicers and how they work

Juicing is nothing new. People have been juicing their […]

Juicing is nothing new. People have been juicing their foods since as early as 150BC, according to the Dead Sea Scrolls unearthed by archaeologists. There isn't much evidence of people juicing to stay healthy up until 1936 when Dr. Norman Walker published "Raw Vegetable Juices" which detailed his journey juicing vegetables which ultimately led to him living to the ripe old age of 99.

Since then, there have been a variety of types of juicers released, and it can be a bit confusing sorting through them all. To make things a bit easier, we are breaking down the 6 main types of juicers you're going to run into on the market today.

Each type of juicer has benefits and drawbacks, and you should decide on which types are best for you before you run out to the store to purchase one.

Centrifugal
Centrifugal juicers are easily the most popular style of juicer on the market. They operate at a speed of roughly 3000-16000 RPM and works by chopping and spinning the vegetables you want to juice, resulting in a pulpy mixture which the spinning then extracts juice from.

The main thing to note about centrifugal juicers is that it is the spinning that ultimately results in the finished product. The juice is then passed through a section of tiny holes, leaving the pulp behind and

Masticating
Masticating juicers, also known as cold press, single gear, or slow juicers work by breaking down fruits and vegetables down into a finely ground pulp which is then sifted to produce a nutrient-dense juice. The juice that comes from a masticating juicer is generally deeper in color, and contains more nutrients than other juicers, making it a healthier drink option.

Another great thing about masticating juicers is that they are generally smaller than other types of juicers. They come in vertical or horizontal configurations making them easy to fit onto your counter.

Triturating
Triturating juicers are often times referred to as twin-gear juicer. They work by pounding and grinding the raw ingredients into ultra-fine particles in order to extract the enzymes, nutrients, and juice for your drink. Triturating juicers have 2 gears that rotate towards each other. There is a small gap between the gears that allows juice to move between them. This ensures that all the juice is extracted.

Like masticating juicers, triturating juicers operate at a lower RPM, generally around 80-160, which means the end result is more nutrient dense than a juicer that works at a higher speed.

Manual
As its name suggests, a manual juicer has no electrical components and is operated by hand. these are generally the least expensive type of juicer you can buy, but they aren't as effective for as many types of foods and require a bit of muscle to be effective.

Citrus juicers are the most common type of manual juicer. These can be used to juice Orange, lemons, grapefruits and limes. In order to work, the manual juicers require that the fruit is cut in half to expose the middle section, which is where the juice is extracted from. If you are trying to extract juice from a vegetable such as celery, manual isn't the best option. If you're curious about the best juicers for vegetables like celery, learn more about them on our buyer's guide.

Hydraulic Press
One of the more expensive and often overlooked types of juicer is the hydraulic press juicer. While they are not what most people get when just starting to juice due to their price and size, they are fantastic at what they do.

Hydraulic Press juicers put the fruit or vegetable under intense pressure to produce juice. Many hydraulic press juicers can product up to 6000PSI of pressure, which allows the juicer to extract an impressive amount of enzymes, minerals, as well as vitamins.

The end result of using a hydraulic press juicer is a nutrient dense, incredibly flavorful drink.

Steam
Not often found in the home, a steam juicer is great for extracting juice from specific types of berries and are a great option to help preserve harvested foods. The steam heats the berries, which causes them to release their juice, which is then collected via a small hose and emptied into a container.

The resulting juice that comes from a steam juicer will, of course, be hot, but can be stored, unrefrigerated for an extended period of time. This process is safe and convenient, and can result in a stock-pile of delicious and nutritious juice. 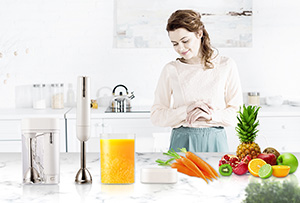 0
PREV: Basic knowledge of juicer      NEXT: What you need to know about immersion mixers